Congratulations to our very own Lani Kane for being elected Chair of chairs!!!

election integrity project files suit against the state of california

Active in numerous campaigns and causes over 50 years

Nixon for Governor Speaker Bureau in 1962

Worked with numerous D.C. based organizations from Americans for Tax Reform, NRA, pro-life groups many of the supporting groups of CPAC

Member of Board (past) Los Angeles Girl Scout Council (5 years)

Past President of Board, Travelers Aid Society of Los Angeles (4 years)

Past member of Board, American Heart Society of Simi Valley/Moorpark (2 years)

Developer of POW/MIA bracelet with Bob Dornan—worked 7 years full time on behalf of prisoners and those missing in action. Including organizing of offices in over 100 US cities, creating collateral material, doing radio and TV appearances nation wide and negotiating with the North Viet Namese, Viet Cong, Khmer Rouge Pathet Lao in Europe and Asia on behalf of the families of the POW’s and MIA’s 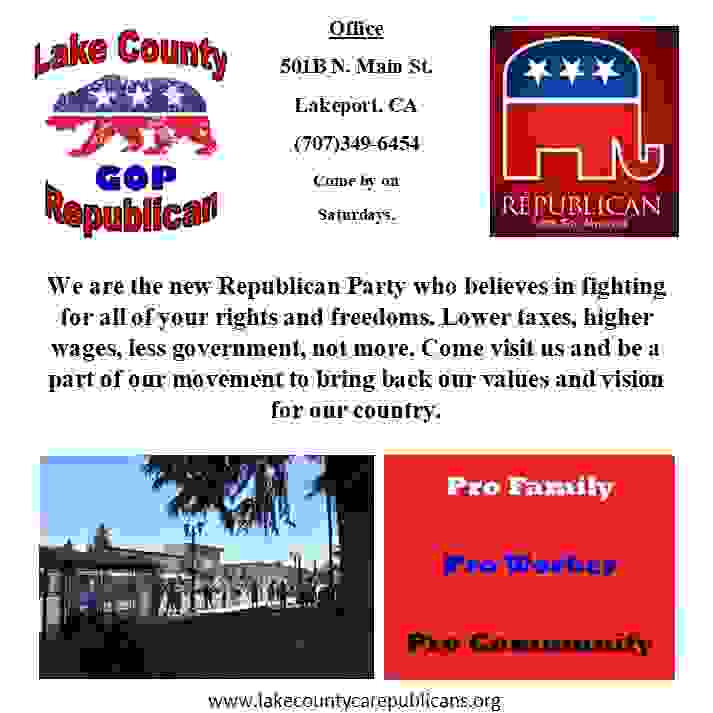 Stop by and visit, tell us how we can meet your needs. We are here to change the party and take back our state from the elites. We are working to represent the hard working men and women of Lake County. Please join our cause of true representative government. If you believe in the Constitution and more personal responsibility then we are YOUR Party!!

What we are about

Why We Are Pro Family

We care about our youth & realize that family should have choices to raise their children with educational options that are best suited for them.

Why We Are Pro Worker

Everyone should have the opportunity to be successful in their own right. Whether you want to specialize in a specific occupation, trade, public service or own your own business. Over reach of big Government and regulation should not infringe on your ability to earn a living.

Why We Are Pro Community

Most of us can agree that when our community thrives we all thrive. Earning more than minimum living expenses allows us to be more involved with civic organizations or churches in order to help our communities grow.

We Salute Our Veterans Who Have Served Our Country & We support Our Troops!

Seeing a need for energetic, motivated Republicans, we formed this website to provide sensible solutions and support our candidates. We are consistently growing, all thanks to the helping hands of this amazing community!

To grow the party base and help elect common sense conservatives to all local, state and national offices. One seat at a time we strive to make an impact and preserve our founding fathers vision for this Constitutional Republic known as the United States of America.

The  Lake County Republican Party needs to continually raise money to support voter education, voter registration, and party building activities throughout Lake County. Your donation of just $10, $25 or  $50 will help us reach every Republican household in Lake County.

please help our cause